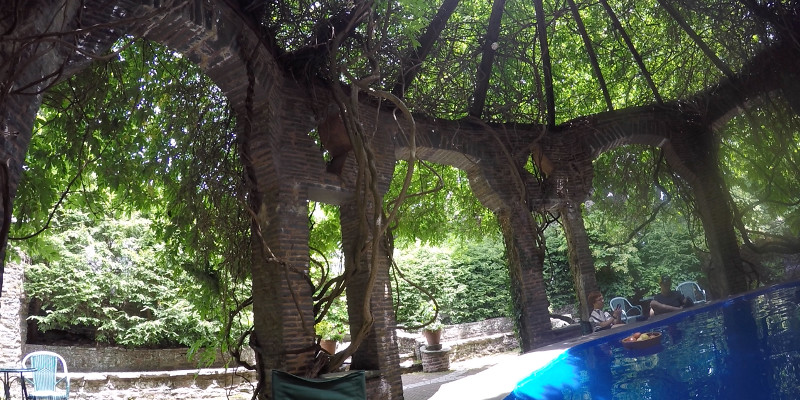 We woke up on Sunday for our day off of the bikes. We had planned for Tia’s mom plus boyfriend to join us on a tourist day of the town of Milford, PA. Milford Pa is one of the Delaware River Towns and has a unique history. A Pennsylvanian Judge Biddis bought the land and designed the layout to mirror Philadelphia. Milford’s central street is equivalent to Market Street running from the Delaware river with Broad Street intersecting it, with East-West streets numbered in a grid formation.

Our first day off activity was to first visit the “Grey Towers”, the home of the Pinchot family. Gifford Pinchot was the first director of the United States Forest Service and had his house designed like a French chateau up above the town nestled in the hills to overlook the Delaware River. A quiet morning wandering the gardens around the house inspired us to dream of a future home and the things we would love to be able to build in a garden, from grape vine laden pergolas to tranquil outdoor dining areas. 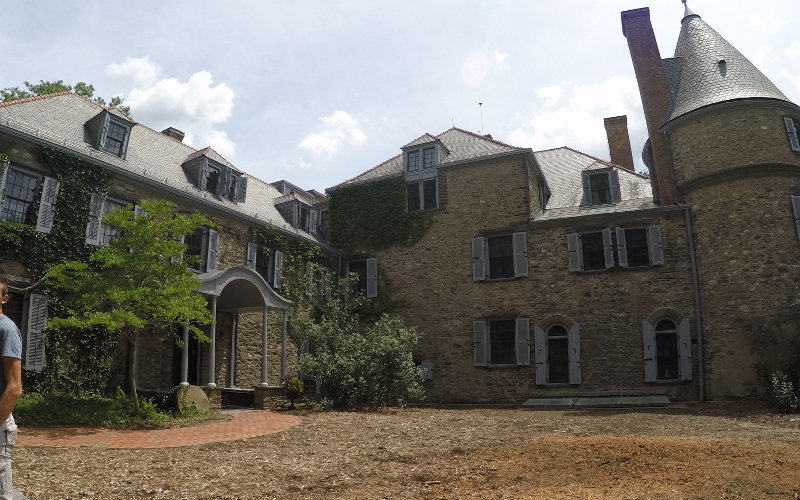 After exploring this chateau we headed back into town to the Waterwheel Café in town for a spot of lunch. The cafe was more of a fully functional restaurant, but with half of the building left over to the old mill machinery, open to guests to explore, which we of course did.

After a full feeding, we set out on our hike for the day to the Knob, reputed to be a must see scenic overlook of the town. Following the instructions from a route we’d found online, we parked up on what looked like a dead-end road with a rusty overgrown bridge at the bottom of it. Climbing past wire fences and ‘keep out’ signs, we cut away from the busy little town and into a quiet wooded area at the base of the climb up to the ridge. After 25 minutes of hiking up steep at times trails, we found ourselves at the overlook and sat to enjoy a rewarding rest-day-afternoon can of beer. Unfortunately the view wasn’t quite as exciting due to it being an overcast day and the view being largely obstructed by foliage, so we decided to extend out hike and head further along the path along the ridge. Eventually finding views of the Delaware which were familiar from a past hike in the area. 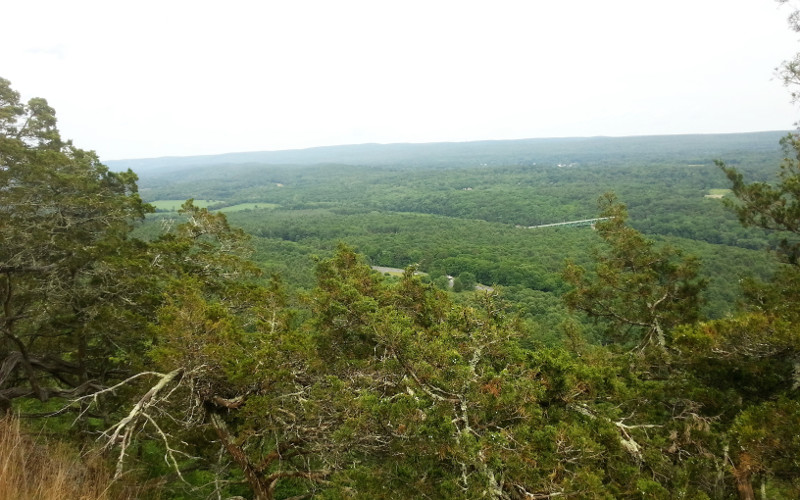 After an evening of the four of us cooking a near lethal amount of sausage and burgers over our camp fire with the addition of a few more beers and a good night sleep in our now familiar tent, it was time to get back on the road. We indulged in a large breakfast, said our goodbyes and rolled out.

We passed from New Jersey into New York entering the city of Port Jervis, but didn’t hang around for long, passing straight out the other side. Knowing that we had the first chunk of our day on what looked like quite long and potentially busy main roads, we were pleased when a road closure and wide hard shoulder gave us a peaceful ride as far as our lunch stop in Monticello. Stopping for a bagel and brownie lunch we couldn’t help but feel like we’d entered a suburb of New York City, with the strong accents and dress styles you might associate with the city.

The roads we’d chosen for the next 10 or 15 miles were unfortunately rather narrow and busy. We were surprised to frequently see Orthodox Jewish people walking along these busy roads, and gathered from the relative frequency of signs for summer camps in Hebrew that we were passing through an area with a strong Jewish demographic.

Soon enough though, the traffic died down and we caught our first glimpses of the terrain rising upwards; we’d made it to the Catskill mountains. While they weren’t mountains in the most dramatic sense of the word, the Catskills do definitely stick up out of their surrounding area and promised to offer us longer climbs and descents than were available closer to home. 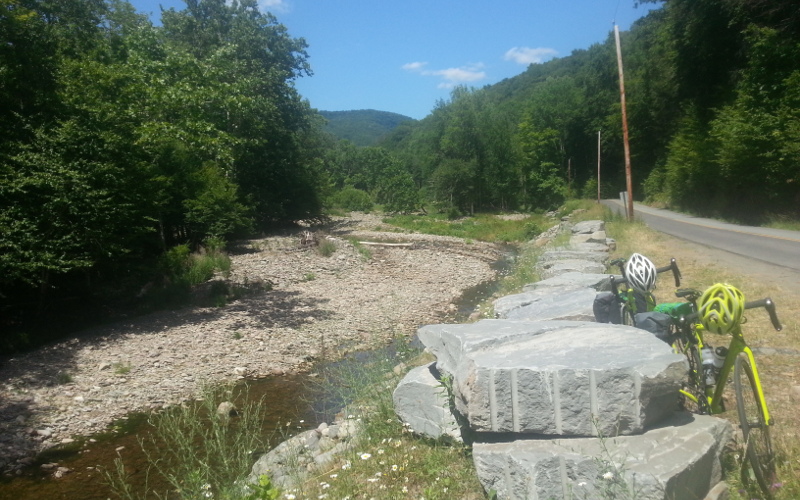 As we found ourselves in the Catskills proper, we were struck by the subdued beauty of the area. We were riding on quiet roads up long valleys with very little apart from the wooded mountainsides around us, and much less population than closer to home. As we rode it was clear that despite the overall quiet feeling on the area, some spots had gained a reputation as ‘must visit’ attractions, as we passed a series of natural pools in a creek, crowded with vacationers whooping and splashing in the cool mountain water.

After a long but pleasantly steady climb to our highest point by bike in the USA so far, the descent passed quickly and we found ourselves in a fairly featureless town on a main road through the region, which would be our last opportunity to load up with food to take to our camp site for the evening. We over-filled our panniers up with an excess of food, including a whole rotisserie chicken plus canned spaghetti and cookies, and completed the last 7 km to our camp site with plenty of afternoon left.

Finding one of the campsite staff involved a lot of riding around in circles (apparently there was a registered sex offender staying there that night and they had to notify everyone else staying there!), but we eventually chose a site, put our tent up and showered off the sweat of a hot day of riding. The camp ground was a far cry from the previous nights with a feeling of isolation and being out in nature. We didn’t see a single RV, and from our location couldn’t even see any other campers. We got a fire going with minimal effort and spend the evening staring into the flames and stuffing ourselves to repletion. 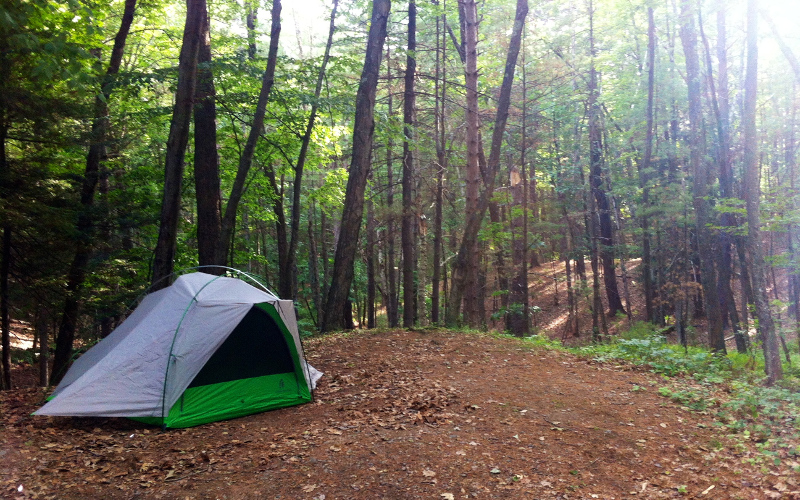